Sewage treatment is the process of removing contaminants from wastewater and household sewage water.

Click here for our range of sewage treatment plants. 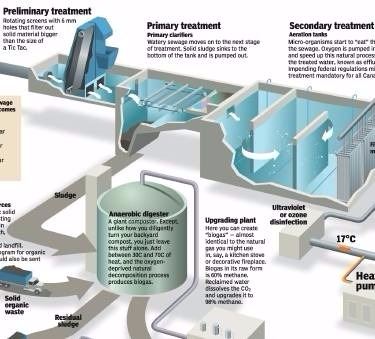 It includes physical, biological and sometimes chemical processes to remove pollutants. Its aim is to produce an environmentally safe sewage water, called effluent, and a solid waste, called sludge or biosolids, suitable for disposal or reuse. Reuse is often for agricultural purposes, but more recently, sludge is being used as a fuel source.

Water from the mains, used by manufacturing, farming, houses (toilets, baths, showers, kitchens, sinks), hospitals, commercial and industrial sites, is reduced in quality as a result of the introduction of contaminating constituents. Organic wastes, suspended solids, bacteria, nitrates, and phosphates are pollutants that must be removed.

To make wastewater acceptable for reuse or for returning to the environment, the concentration of contaminants must be reduced to a safe level, usually a standard set by the Environment Agency.

Sewage can be treated close to where it is created (in septic tanks and their associated drainfields or sewage treatment plants), or collected and transported via a network of pipes and pump stations to a municipal treatment plant. The former system is gaining popularity for many new ECO towns, as 60% of the cost of mains sewerage is in the pipework to transport it to a central location and it is not sustainable. It is called 'Decentralisation' of sewage treatment systems.

The job of designing and constructing sewage works falls to environmental engineers. They use a variety of engineered and natural systems to meet the required treatment level, using physical, chemical, biological, and sludge treatment methods. The result is cleaned sewage water and sludge, both of which should be suitable for discharge or reuse back into the environment. Sludge, however, is often inadvertently contaminated with many toxic organic and inorganic compounds and diseases and the debate is raging over the safety issues. Some pathogens, for example, 'Prion' diseases (CJD or 'Mad Cow Disease is a Prion disease) cannot be destroyed by the treatment process.

The features of wastewater treatment systems are determined by:

Discharges from treatment plants are usually diluted in rivers, lakes, or estuaries. They also may, after sterilisation, be used for certain types of irrigation (such as golf courses), transported to lagoons where they are evaporated, or discharged through underground outfalls into the sea. However, sewage water outflows from treatment works must meet effluent standards set by the Environment Agency to avoid polluting the waters that receive them.

Sewage is partly decomposed by anerobic bacteria in a tank without the introduction of air, containing oxygen. This leads to a reduction of Organic Matter into Methane, Hydrogen Sulphide, Carbon Dioxide etc. It is widely used to treat wastewater sludge and organic waste because it provides volume and mass reduction of the input material to a large extent.. The methane produced by large-scale municipal anerobic sludge treatment is currently being examined for use in homes and industry, for heating purposes. Septic tanks are an example of an anerobic process, but the amount of methane produced by a septic tank (it is only the SLUDGE at the bottom that produces methane) serving less than 100 people is miniscule. In addition to this, septic tank effluent still contains about 70% of the original pollutants and the process smells very badly, due to the Hydrogen Sulphide, if not vented correctly. The effluent produced by this process is highly polluting and cannot be discharged to any watercourse. It must be discharged into the Aerobic layer of the soil (within the top metre of the ground) for the aerobic soil bacteria to continue the sewage treatment via the aerobic process below.

In this process, aerobic bacteria digest the pollutants. To establish an aerobic bacterial colony you must provide air for the bacteria to breathe. In a sewage treatment plant, air is continuously supplied to the Biozone either by direct Surface Aeration using Impellers propelled by pumps which whisk the surface of the liquid with air, or by Submerged Diffused Aeration using blowers for air supply through bubble diffusers at the bottom of the tank. (The most modern aerobic sewage systems use natural air currents and do not require electricity, though these are only used for small scale sewage systems at the moment. Once again, the general public leads the way!) Aerobic conditions lead to an aerobic bacterial colony being established. These achieve almost complete oxidation and digestion of organic matter and organic pollutants to Carbon Dioxide, Water and Nitrogen, thus eliminating the odour and pollution problem above. The effluent produced by this process is non-polluting and can be discharged to a watercourse

This is usually Anerobic. First, the solids are separated from the sewage. They settle out at the base of a primary settlement tank. The sludge is continuously being reduced in volume by the anerobic process, resulting in a vastly reduced total mass when compared to the original volume entering the system.

The primary settlement tank has the sludge removed when it is about 30% of the tank volume.

This is Aerobic. The liquid from the Primary treatment contains dissolved and particulate biological matter. This is progressively converted into clean water by using indigenous, water-borne aerobic micro-organisms and bacteria which digest the pollutants. In most cases, this effluent is clean enough for discharge directly to rivers.

In some cases, the effluent resulting from secondary treatment is not clean enough for discharge. This may be because the stream it is being discharged into is very sensitive, has rare plants and animals or is already polluted by someone's septic tank. The Environment Agency may then require a very high standard of treatment with a view to the new discharge being CLEANER than the water in the stream and to, in effect, 'Clean it up a bit'. It is usually either Phosphorous or Ammoniacal Nitrogen or both that the E.A. want reduced. Tertiary treatment involves this process. If Phosphorous is the culprit, then a continuous dosing system to remove it is the tertiary treatment. If Ammoniacal Nitrogen is the problem, then the sewage treatment plant process must involve a nitrifying and then de-nitrification stage to convert the ammoniacal nitrogen to Nitrogen gas that harmlessly enters the atmosphere.

Finally, the Sludge is periodically removed by tanker and taken for further processing via aerobic/anerobic processes and then disposed of or re-used, and the treated water may be discharged into a stream, river, bay, lagoon or wetland, or it can be used for the irrigation of a golf course, green way or park. If it is sufficiently clean, it can also be used for groundwater recharge or agricultural purposes.