Septic tanks, sewage plants, cesspits and cesspools are used for rural residential and commercial properties, plus some in urban areas and they need regular emptying. 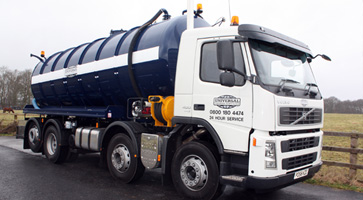 At Crystal Tanks we understand that septic tanks, cesspits and cesspools can be located in the least accessible areas. We can arrange for specially adapted vehicles to service awkward sites and an experienced operator ready for a quick and clean removal of the waste.

We are able to arrange regular septic tank emptying contracts to both residential and commercial customers.

As well as emptying your septic tank we also offer a complete installation and repair service for all Septic tanks and sewage treatment systems.

All septic tank systems are emptied at least annually if the tank is sized for the number of persons using it..  However, some houses have very large tanks and few people using them Emptying then is dependent literally on 'bums on seats' as the table below shows:  Septic tank emptying is important for all sizes of tanks. 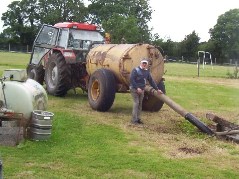 and disposal of sewage wastes.  The sludges and liquids must be taken to a sewerage works for further treatment and sterilisation before it is discharged or spread on agricultural land.

You are not allowed to pay a 'local farmer' to empty your tank as both you and him are breaking the Law and the fines are prohibitive.

As explained in Septic Tank Systems, the solids settle and build up as sludge in the bottom of the septic tank.  These need emptying annually in order that the soakaway is protected from blockages.  Failure to remove them will result in the following problems:-
In order to avoid future septic tank and soakaway system problems, the money spent on emptying is well worth it as soakaways are very expensive to replace and once ruined, there is little you can do to remedy the problem.

You may not even have enough land to install a new soakaway, as it cannot occupy the same site as the old one and it is likely to involve at least 60 metres of pipework which must be at least 15 metres from a building.